One lad was able to tuck his little brother underneath a blanket. Using only his nose to do the work, he did a great job fulfilling his role as his sibling’s awesome dog-sitter.

The family’s charming pup noticed that his baby sibling was sleeping uncomfortably underneath a thin blanket. Because he considers himself as the baby’s caring older brother, of course, he does not want his sib to feel cold and bumpy. So, he did something truly touching and amazing for the cute baby.

With his snout, the pup tried to lift the blanket on top of the little guy. He digs unto the quilt many times so he could cover his brother’s entire body.

After quite a lot of lifting and poking, he finally achieved his aim of draping the blanket over the small guy.

The lad felt satisfied with his dog-sitting duties but was seen stretching out his body on the floor afterward.

Such a touching moment was uploaded on the internet and it garnered a total of 8.8 million views.

In an interview with Alexandra Bassett, a behaviorist and dog trainer at Dog Savvy Los Angeles, she said that canines have a distinct kind of den instinct. They also have a unique mating drive which is a part of what people call a pack drive.

Pack drive means that dogs own certain traits that make them feel more bonded with people whom they treat as a part of their family. So, their protective behavior towards babies come out to be natural.

Furthermore, studies reveal that babies who grew up having dogs by their side tend to feel much happier and become more physically fit. Meaning, little humans don’t only grow up having a furry friend because they also have a companion that helps them achieve a stronger immune system.

After reading this, you might want to consider adopting a pup for your baby. Above all, they are friendly and reliable creatures that can protect homes, people, even babies.

Advertisements Countless abandoned and stray dogs find refuge in the … 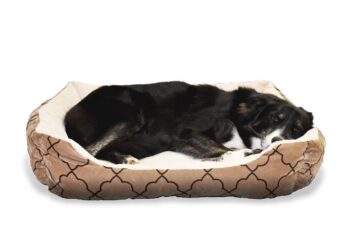 Kindness on full display as employees of this bus terminal …

How an alert first responder did the one thing everyone …

Advertisements   Thinking of a breath-taking stunt that your dog …

Advertisements All food tasters out there, watch out for this …

Sarah currently resides, with her husband, in Ohio. Sarah is passionate about helping doggie teams and their parents create healthier, happier, and longer lives for dogs. Her family doggie team includes a Labrador Retriever, Poodle, and a Schnau-Tzu who rules the pack.

Our website is made possible by displaying online advertisements to our visitors. Please consider supporting us by disabling your ad blocker.

Refresh
We use cookies on our website to give you the most relevant experience by remembering your preferences and repeat visits. By clicking “Accept”, you consent to the use of ALL the cookies.
Do not sell my personal information.
Cookie SettingsAccept
Manage consent