Discovering how to stop a Pitbull puppy from biting is the top question most puppy owners ask.

We first must determine what causes your puppy to bite. There are several reasons why Pitbull puppies bite. Knowing the specific reason lets you understand how to stop a Pitbull puppy from biting with better results. 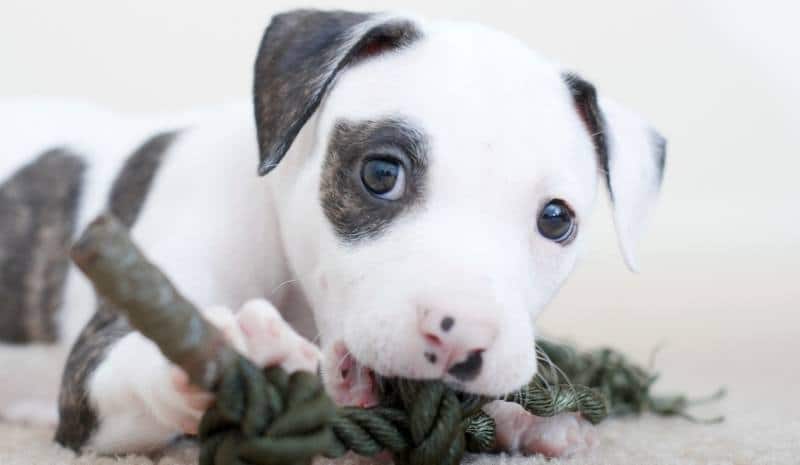 How To Stop A Pitbull Puppy From Biting

1. Teething
Pitbulls bite most during their teething phase. As with any mammal, teething hurts, and the universal way to find relief is by biting and chewing.

You cannot stop a puppy from biting while it is teething. Instead, distract your pup.

Have on hand an assortment of chew toys for your pup. You should have soft squeeze toys, plush ones, and harder toys. You can also use chew sticks that are not rawhides.

2. Playing
If your Pitbull pup starts nipping at your fingers or toes while you’re playing, offer them a toy instead.

Pitbull puppies are very energetic and playful animals. They will bite and mouth by instinct when playing like a puppy.

As with teething, keep toys where you can easily reach them so you can quickly offer an acceptable alternative when the puppy feels a need to chew.

You can correct the dog not to bite or chew certain things but don’t discipline the pup as you need to train them on what is okay to bite while playing and what is not okay to chew.

3. Overly Protective
If you do not socialize your pup with other dogs and people, they can get clingy to their pack. That is their owner and especially the owner’s kids.

They might bite other adults, kids, or dogs that come around as a way to protect their territory and pack members.

This quickly becomes a serious problem.

It is why owners should find ways to curb this behavior when the pitbull is still young. (Note that biting from an adult pitbull can be painful, even when they are just playing).

Luckily, through some training methods, you can correct this behavior. Today, we will share some tips on stopping a pit bull from biting and hopefully help you keep your pet from biting you, others, or physical objects in your home. Read on to learn more. 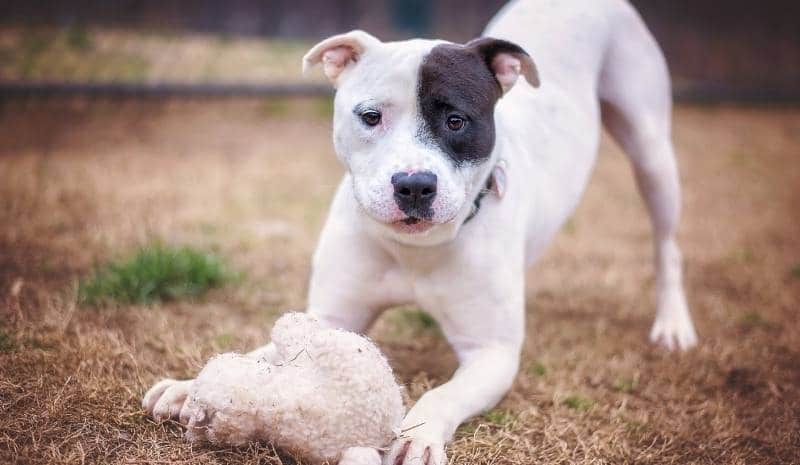 How Do You Train a Pitbull Puppy Not to Bite?

It is not uncommon for puppies to bite you when they are playing with you. That is because they do practice mouth play with their siblings when they are young.

However, you should draw the line between playing and biting.

Sometimes, they bite to show dominance over their owners, which is why you should set things right.

Regardless of the reason your pitbull bites, you should address this issue as soon as you can. Here are several ways of how to stop your pitbull puppy from biting.

When puppies play together, and one gets bitten by the other, they’ll often squeal to inform the bitting puppy to get off.

Pitbull owners can also imitate this sound. If your pup bites you, make a squealing sound followed by command words like “stop” or “no.”
This action will make your puppy think that you’re hurt after he/she has bitten you.

But note that your pet may not like this as they’ll see it as a way of giving up dominance. And therefore, they may want to be reassured or comforted.

If the pup repeatedly continues after this squeal and command method, don’t reassure or comfort after the latest bite. Instead, it is best to ignore the puppy by turning your back and leaving them. After a short time, come back and play again and then comfort them. It sounds mean, but it helps stop him/her from biting.

Is The Puppy Biting Kids?

It is important to also train your kids (and neighbor kids) on how to play with a Pitbull puppy properly. Have the kids use chew toys and not their hands to play with the dog.

It’s normal for kids to use their hands when playing with a puppy. Often the kids will pull ears, tails and even get right in the puppy’s face. This a good reason why training how to stop a pit bull puppy from biting should be done sooner than later.

Often kids will get their hands too close to the pup’s mouth. This makes the puppy think that your hands are fair game.
Kids should use chew toys to help the pitbull focus on the toy and not your hands. This helps them learn that they should not bite their fingers.

Adults should work early to get their pup used to hands near their mouth without biting or nipping. This will help with alleviating a puppy-biting kid’s issue, but it has greater importance.

Your Pitbull puppy should learn that they can have hands near their mouth without being tempted to bite them. Once you have them comfortable with this action, it can be easy to stop the biting behavior altogether.

Doing these things will be impossible if your puppy bites your hands every time you put them close to their mouth.

How to make a pitbull puppy stop biting.

Train Your Pet to Not Bite over Food

A Pitbull is more likely to bite so when they see food.

Why? Because these puppies are usually overprotective of food since they learned to fight for the food in the litter when they were young.

This instinctual behavior can extend into your home when you offer him/her a bowl of food.

If your pet is showing food aggression, you should make them accept that you are in charge, meaning you can pick and down the bowl back anytime, without them being aggressive.

The point is to make your puppy understand that you’re the dominant one who controls their food source without them biting you.

Other helpful tips on how to make a pitbull puppy stop biting include:

How Do You Discipline a Pitbull Puppy? 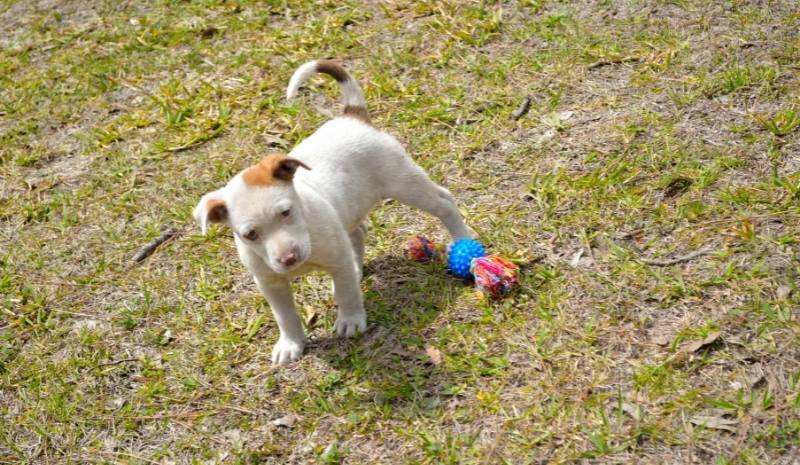 That means that you praise and reward them, either with treats or attention, when they do something right.

But, before you start disciplining your puppy, first understand what is causing the bad behavior and how they’ll respond to that situation.

Here are some tips on disciplining a pitbull:

These discipline steps help establish dominance, plus they will love you more since they’ll understand that being good gets them what is needed from you when they are good. Rewards include attention, dog treats, and any other thing that your dog likes.

Why Is My Pitbull Puppy So Aggressive?

Many reasons can bring out aggression in your pitbull. These include:

1. Illnesses and Injuries
Experts say that some pathological and hormonal issues can cause a pitbull to be aggressive. These conditions affect their behavior, making aggression develop.

Canine hypothyroidism is one such condition that can be diagnosed with a simple test.

Also, injuries and pain can make your dog aggressive.

If your pet is suddenly aggressive, it’s best to visit a vet to analyze their health.

2. Fear and Anxiety
Dogs will be aggressive if they think that they are in danger. It’s usually a way of protecting themselves.

For instance, if he gets backed into a corner and thinks he cannot escape that, he can show aggression.

But if this aggressive behavior is more than expected, it could indicate that your dog has been neglected, abused, or experienced a traumatic event.

With training and patience, you can manage these fears independently, or you can also seek advice from a veterinarian.

3. Show of Dominance
Dominance in dogs isn’t a behavior. It’s a trait. These animals are not submissive by nature but are excellent pack members when an Alpha is established in the pack. (The Alpha is you 😊)

If they feel that your position as Alpha is weak, they’ll react by snapping, growling, orbiting. Therefore, they need to know that you are in charge. That is why training your puppy early is vitally important.

But, canine aggression isn’t always related to dominance. Dominance isn’t the main reason why a dog might be aggressive. Rather, aggression stems from possessiveness and being overly protective.

4. Possessiveness
Sometimes, your pitbull can be aggressive when they possess a valuable thing like its Alpha, the Alpha’s children, or perhaps a toy or territory (which is your yard and house).

If your dog has possession aggression, he/she can growl and bite when they perceive anyone (family members, friends, or strangers) as a threat.

The degree of aggression will depend on the value that your pitbull attributes to an object or resource.

The Alpha and their pack hold the highest value and, without proper training, can lead to the most vicious bites.
On the other hand, Nipping might occur when you try taking his pig’s ear toy, but he might not care when you take his rubber toy.

How Do You Get a Pitbull to Release Its Bite?

It is vitally important that you know how to act if you find your pitbull gripping onto an object, or worse, another dog or human being.

While most dogs snap at the person or object they have a problem with, biting and releasing repeatedly, Pitbulls tend to bite and hold.
If your pitbull is fighting with another dog…

How To Make A Pitbull Puppy Stop Biting Conclusion

These quick tips can help you teach your Pitbull puppy not to bite.

If these tips don’t stop this behavior or if your pitbull lunges growls and will not let go even after you signal with a yelp, it is time to get professional assistance.

A good training program is always the best way to learn how to stop a pitbull puppy from biting and nipping before your Pitbull puppy reaches adulthood.