How to Stop German Shepherd Puppy from Biting

While labeling any dog breed would be unfair, specific characteristics are commonly associated with German Shepherd puppies. Unfortunately, some people have the misconception that German Shepherds have a tendency to be vicious. That could not be further from the truth.

How To Stop German Shepherd Puppy From Biting 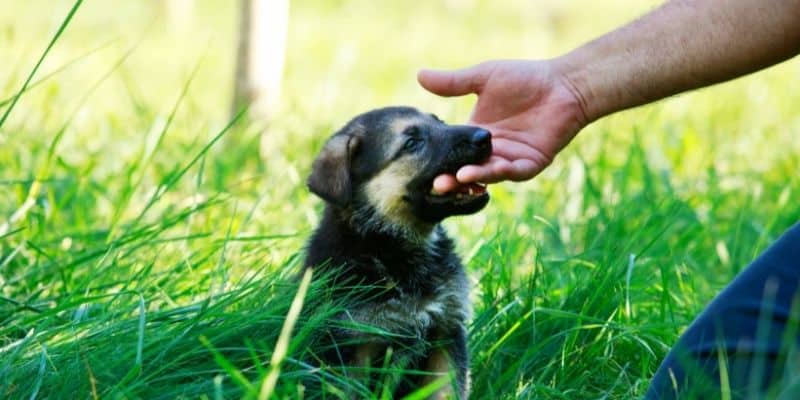 It may not come as any surprise to you that you train a German Shepherd puppy not to bite in precisely the same fashion as you would train any other breed. Again, it all comes down to basic obedience training.

1. Get a good puppy and dog training program. Training your German Shepherd puppy will be covered along with other good dog training tips.

2. Find a class or trainer in your area. This option will cost you more money and will be less flexible to your time availability.

How To Get A German Shepherd Puppy To Stop Biting

You have to remember that it isn’t as simple as taking your puppy to a class once or twice a week and then hoping for the best.

It requires constant effort on your part. You will need to consistently work with your dog to reinforce what you learn at obedience class and continue working with your puppy after completing the training course.

If you don’t, your puppy is likely to backslide and stop listening to your commands.

That is why getting a good pet training course that you can continually reference is a fantastic idea.

Is It Normal for German Shepherd Puppies to Bite? 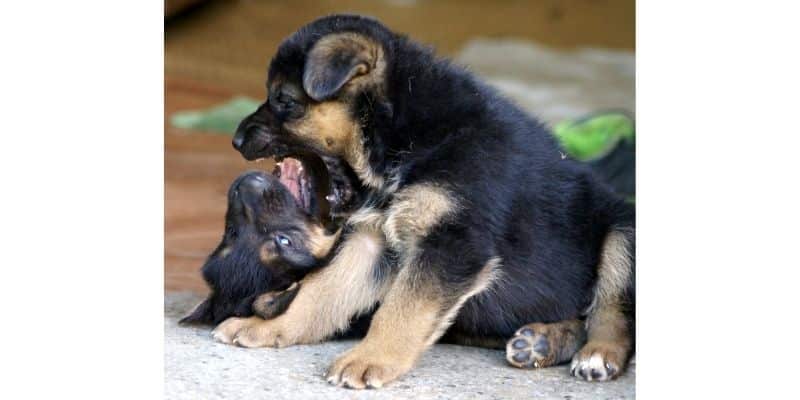 It simply means that you are experiencing the standard German Shepherd puppy biting phase. He is a puppy, and all puppies bite.

If you feel you have a German Shepherd puppy biting problem, it could be because they are teething and their mouth hurts.

Giving them both a soft chew toy and a hard toy that you can put in the freezer or refrigerator will provide soothing relief to your pet’s sore gums.

At other times, German Shepherd puppies bite simply because that is the way they experience their world.

Humans have hands to explore something on a tactile level. Dogs have their noses to smell and their teeth for everything else. Gently biting is normal. Therefore, you shouldn’t be afraid that your puppy will end up being a vicious dog that you can’t socialize with anyone else just because it bites when it’s a puppy.

Why Is My German Shepherd Puppy Biting Hard And So Aggressive?

First of all, sit back for a second and take an objective look at things. Is your puppy really aggressive, or is it just playing like every other dog?

Answer this question fairly, not from the perspective of fear or anger.

– If he’s just playing, it’s essential to keep things in check. But it’s also important to let him be a dog.
– If he is genuinely being aggressive, there are things that you must do to curb that aggression.

Remember the part about making sure that your German Shepherd puppy gets basic obedience training?

How To Get A German Shepherd Puppy To Stop Biting

Consistent, ongoing training reinforcement is of paramount importance. Everything about your puppy’s personality and behavior is generated from this training or lack of proper training. Training a German Shepherd puppy should begin as soon as your receive your new best friend.

Therefore, if you’re not getting the training, everything else is more likely to fall apart. It’s not fair to allow something like that to happen to any dog, regardless of the breed, because the dog is the one that ends up getting blamed for it.

Instead, get him the training he needs, work with him, and make sure that he has things to do that will occupy his time.

Play with him, give him a chew toy that will keep him busy for a while, or do something similar. The more time you spend with him doing some type of physical activity that gives you both the opportunity to bond with one another, the better. It all comes down to a less aggressive dog that is more trusting and more willing to listen.

How Do You Discipline a German Shepherd Puppy?

Make sure that you discipline your dog with positive reinforcement and not negative actions.

Whatever you do, don’t get mad and yell at your dog, and don’t hit your dog. These aggressive reactions will not stop your puppy from doing whatever it did that upset you in the first place, but they will cause your dog to stop trusting you.

How To Train A German Shepherd Puppy To Stop Biting

Use treats for positive reinforcement.

When your puppy does something wrong, give him a pre-selected command to express that you are not happy with what he’s doing. A simple “no” will do the trick.

When he responds favorably, give him treats, pet him or allow him to have time with his toy. This response is much better than raising your voice or using other unfavorable training methods that only serve to make the dog resent you.

If you’re still having behavioral issues, there’s a better than average chance that you’re not giving your dog enough exercise. 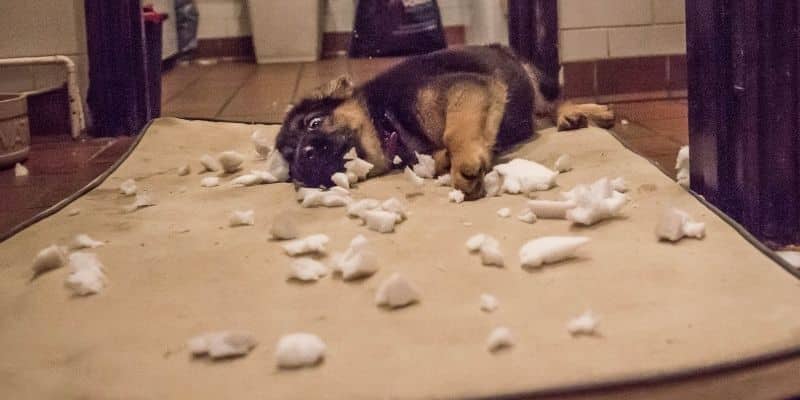 Increasing his physical activity can go a long way toward curbing any behavioral issues that might still exist.

At What Age Do German Shepherd Puppies Stop Biting?

Puppies are somewhat like children in this particular respect. Some of them stop biting at a relatively young age, while others continue to display this behavior for so long that you might start to fear it will never go away.

Typically, a German Shepherd will tend to bite things for roughly the first year of its life.

However, that doesn’t mean that every dog is automatically going to stop biting when it turns 12 months old. Most dogs will stop chewing on things by the time they’re six or seven months old. Unfortunately, others might continue displaying the behavior until they are two or even three years old.

That is why give your German Shepherd puppy basic obedience training and learn commands such as leave it, sit, and stay. And to continually reinforce the behavior you want with ongoing training and positive reinforcement.

If you have a dog trained to listen to you and trained not to bite down on things, it shouldn’t be biting in the first place. It’s much easier to curb this behavior than simply hoping it will stop on its own.

When it’s all said and done, it’s important to remember that a puppy is not a novelty item.

When you decide to get a puppy, ask yourself if you’re genuinely willing to put in the time and effort required to teach him the behaviors you want him to learn.

Furthermore, you have to remain calm. If you’re not calm, your dog will pick up on your emotions and will tend to act out.

Your behavior and general disposition are essential with any breed, but it becomes even more critical when discussing larger breeds like German Shepherds. Behaviors that are borderline acceptable or even cute when the dog is a puppy can become dangerous when that same dog is fully grown.

That doesn’t necessarily mean that the dog himself is dangerous, only that he’s going to be large enough that he could potentially injure someone accidentally. Imagine having a fully grown German Shepherd run at you at full speed in an attempt to jump in your arms as he used to when he was a puppy.

With a combination of your purchased dog training program, like the recommended course “Brain Training for Dogs,” and an in-person class with a trainer, you will have a wonderful German Shepherd family pet. 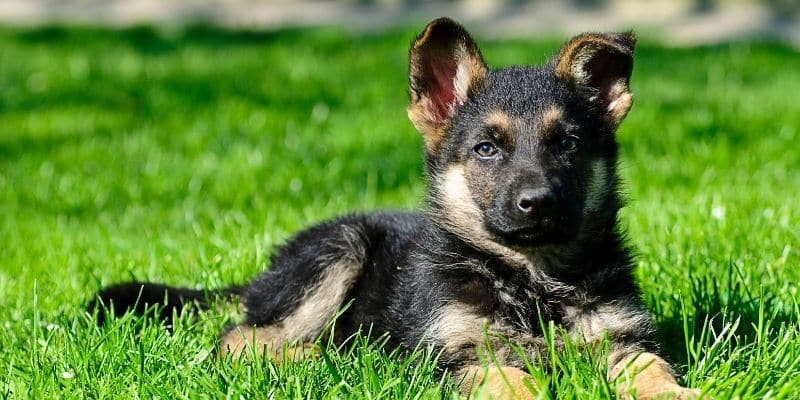 Getting a German Shepherd puppy can be exciting, but particular challenges present themselves when you decide to add a new best friend to the family. In most cases, saying that there is an adjustment period for the entire family would be an understatement.

Puppies are a lot of work. They aren’t house trained. They tend to chew on practically everything they can get near and cry a lot. These are just some of the things that you have to prepare yourself for when you have a new puppy.

German Shepherds are among the most loyal, brave, and intelligent breeds of dogs out there. While they are very protective, they don’t tend to be vicious unless they have been abused or very poorly socialized.

That said, they do tend to be quite headstrong. Some dogs of this breed can be neurotic. As a result, they must be mingled with both people and other animals.

In addition, they need to go through proper obedience training. If you’re concerned about what seems to be aggressive biting or nipping as puppies, you must know that German Shepherds don’t really have a tendency to bite more than any other breed as a puppy.

Most German Shepherd puppies bite quite a lot, and others don’t display this behavior as much. The critical thing to remember is that all breeds of puppies typically tend to bite. That does not mean that you have a vicious dog on your hands, but it does mean that you have a dog that must be taught proper boundaries.

We hope you enjoyed our article on how to get a German Shepherd puppy to stop biting.