Labradoodle vs Goldendoodle – What You Want To Know

CHOOSING YOUR DOODLE
There are oodles of Doodles out there, Chipoodles, Cavoodles, Shmoodles, Spoodles, and even Shih-Poos! Two of the largest and most beautiful types of Doodles are the Labradoodles and Goldendoodles. (also known as Groodles). What is the difference between these two dog breeds? Let’s find out, shall we?

HOW THE HYPOALLERGENIC CROSSBREED DOG ALL STARTED 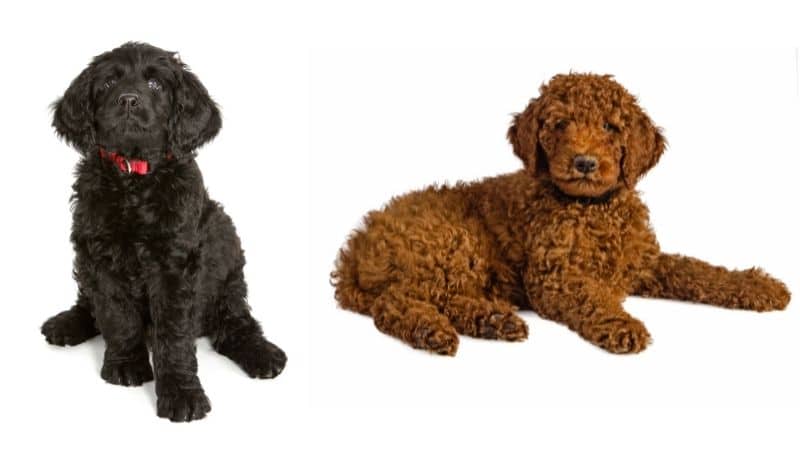 Back in the late 1980s, a blind woman in Hawaii contacted the Royal Guide Dog Society of Australia, looking for a guide dog to which her husband would not be allergic. For three years and trying with thirty-three different candidates, the Aussie organization tried to train Standard Poodles to do the job, with no success.

Then, in 1989, guide dog trainer and breeder Wally Conron crossed a white Standard Poodle called Harley with a Golden Labrador called Brandy. Wally wanted to combine the hypoallergenic coat and intelligence of the Standard Poodle with the friendliness and trainability of the Labrador. Three puppies were born.

Only one of these was hypoallergenic and trainable to fit the job description. This one puppy’s name was Sultan, and he went on to be a highly successful guide dog in Hawaii for his new mistress and her allergy-prone husband. These days it’s hard to believe, but there was difficulty finding homes for the two remaining puppies. No one wanted a hybrid dog. Until Wally and the Guide Dog Association started calling them Labradoodles instead of Labrador/Poodle crosses. The rest is history!

By the 1990s, Labradoodles were becoming popular in Australia and the U.S. Originally used as guide dogs, assistance dogs, and therapy dogs, their friendly, gentle, and trainable natures quickly made them highly desirable as pets as well.

Goldendoodles really started to take off at this time, too (although there is a record of a litter of them being bred in the U.S. by Monica Dickens, great-granddaughter of the writer Charles Dickens, in 1969.) A cross between a Golden Retriever and a Poodle, they were bred as an alternative to the Labradoodle and were also initially used as guide dogs and assistance dogs. Just like the Labradoodles, however, their kind and loveable nature endeared them to the general public, and their popularity as pets proliferated.

HOW BIG DO THEY GET?
Initially, Standard Poodles were used in crossbreeding, and they aren’t small dogs, weighing in at up to sixty-six pounds ( thirty kilograms). Standards Poodles were initially bred in Germany and France in the Middle Ages as water dogs. They loved the water and would retrieve ducks and arrows for their owners. ‘Poodle’ comes from the German word pudel, which means splash in the water. (See where ‘puddle’ comes from?)

So, the Labradoodles and Goldendoodles in the 1990s were large dogs.

Labradoodles would stand at up to twenty-four inches (sixty-three centimeters) at the shoulder and weigh up to sixty-six pounds. 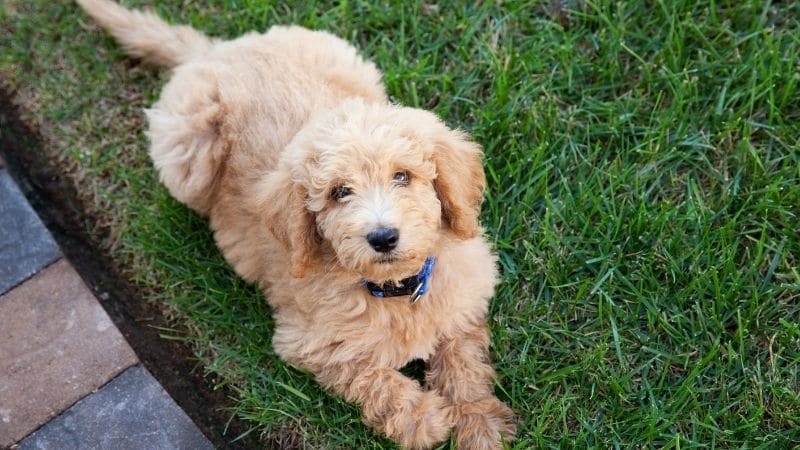 Goldendoodles were of similar height to Labradoodles but could weigh even more, coming in at up to nearly eighty pounds (thirty-six kilograms).

As the years went by, breeders started using more miniature poodles as the demand for these designer dogs grew. These days, both Labradoodles and Goldendoodles are classified as Miniature, Medium, or Standard.

Standards are the big, original guys we have just talked about and are still very much on the scene. The miniatures are at the other end of the scale, weighing in as little as sixteen pounds (seven kilograms) and making it to only fourteen inches (thirty-five centimeters) at the shoulder. Like Goldilocks and The Three Bears, the Medium guys are right in the middle between the Miniatures and the Standards.

As you can see, there isn’t much in it when it comes to comparing the size of these two breeds. Goldendoodles are slightly heavier as a rule, but that’s about it.

WHAT ABOUT THOSE HYPOALLERGENIC COATS?
An actual hypoallergenic coat just isn’t a thing. Lack of hair shedding doesn’t mean that people can’t be allergic to a dog or any other animal if it comes down to it. It’s often the dander and/or saliva that is actually the trigger for allergies and not the hair itself at all.

After saying that, dogs that shed less or not at all often have less dander, which is helpful to allergy sufferers. Both the Labradoodle and the Goldendoodle fall into this category, and it is a sliding scale. Some shed hair to a small or large extent and have dander, and others don’t shed at all, and the dander is pretty much non-existent.

How much dander your doodle has depends on how much poodle is in the genetic mix. In a nutshell, the more poodle in the mix, the less shedding and the more insignificant the amount of dander. The lack of significant danger, the less likely they are to trigger allergies and asthma in their humans.

As you can see, so far, just like when it comes to their size, there isn’t much in it.

Where things do get interesting is coat color.

Both breeds can be gold, cream, black, red, and multicolored. Labradoodles then take it a little bit further with color variety. Want a lavender Labradoodle? Well, they exist, as do parchment, cafe, and chalk Labradoodles. So many colors to choose from for your new puppy!

PERSONALITY PLUS
“Kind, friendly, intelligent,’ are all words used frequently to describe both Labradoodles and Goldendoodles. Their natures are similar, there is no doubt about it, but there is a little bit more to it than that. 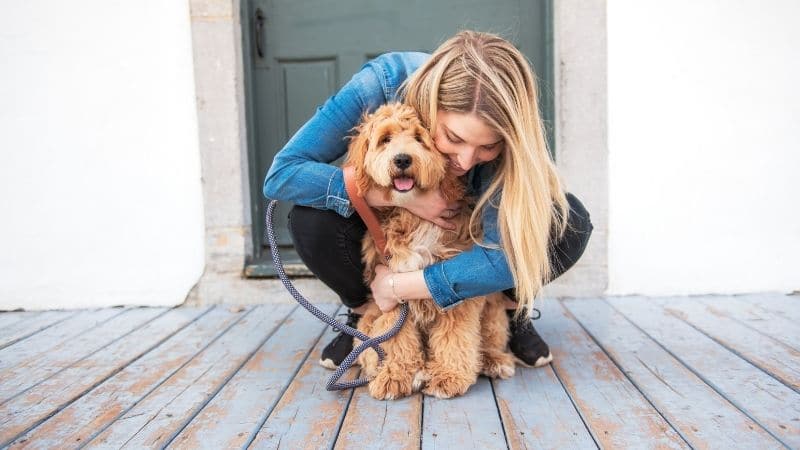 Labradoodles can be very energetic and joyful dogs when they are free to run and play. Sometimes, this begins to border on rambunctious! One outstanding quality that they possess when it comes to temperament is their ability to switch gears and become gentle, intuitive, and loving companions when humans need them to be. There is an excellent reason they are so commonly used as therapy dogs and make such wonderful family pets.

Goldendoodles are also exuberant, joyful dogs during their playtime. Just like their Labradoodle cousins, they can tone things down to gentle and loving when the occasion demands but aren’t quite as intuitive as the Labradoodles. They can also be a little more stubborn, a tad more sensitive, and although the jury is out somewhat, a little noisier on the barking front.

Just as is the case with any dog breed, some problem behaviors can develop. Some of this stems from the fact they have become so popular. Unscrupulous breeders, in it only for the money, have bred for that quick buck and not paid attention to the personality characteristics of the puppies they churn out. Anxiety can be an issue, separation anxiety in particular, which can result in destructive behavior. In particular, some Goldendoodles can get a little mouthy and a few even aggressive with other dogs and with humans.

HEALTHY OUTLOOK
Both Labradoodles and Goldendoodles are pretty healthy in the general scheme of things. Both have lifespans of about 12-15 years and, if looked after well, shouldn’t need to see the inside of vet clinics too often.

However, there are a few health issues to watch for in both camps.
Right at the top of the list are elbow and hip dysplasia. This means that the elbows and/or the hips don’t form correctly, resulting in poor joint function, pain, and, later in life, debilitating arthritis.

A genetic eye disease called progressive retinal atrophy (PRA) is present in both breeds, leading to blindness. Dermatitis and ear infections are also commonly reported in both species.

Given that both of them are relatively new breeds, only really appearing on the radar in the 1990s, these are pretty impressive statistics. So, they are obviously winning in the popularity stakes in both the U.S. and Australia, but what about the rest of the world?

The answer is, they are everywhere! Russia, Norway, Finland, Canada, New Zealand, Slovakia, and Columbia are just some of the countries where registered breeders are making the world a better place with Goldendoodles and Labradoodles.

THE FINAL VERDICT
At the end of the day, when all is said and done, Labradoodles vs. Goldendoodles are very similar with similar temperaments, physical characteristics, and even similar health issues.

Labradoodles have a more extensive range of color options and are, on the whole, slightly more stable and intuitive temperament-wise.

Goldendoodles are somewhat heavier, tend to shed a little more, and don’t have quite the high energy levels that their cousins the Labradoodles have.

If you are looking to get one of these little rays of sunshine to call your own, do your homework. Always source responsible breeders to make sure they are breeding for sound temperaments. Plus, ensure they get their breeding dogs checked for hip and elbow dysplasia and PRA.

Additionally, make sure you have the time and energy to give these beautiful dogs the healthy environments, exercise, love, and understanding that they so richly deserve, and they will pay you back with all the joy in the world for many years to come.

Labradoodle vs. Goldendoodle Fun Facts…
In 1965 a Labradoodle called Red appeared in the T.V. show Get Smart as Fang, aka AgentK-13. When Fang retired from his agent duties, he was assigned to a new job; burying the evidence! Red also appeared in an episode of Lassie.

The Crown Prince and Princess of Norway have a Labradoodle called Milly Kakao.

Goldendoodles have been used as sniffer dogs to help people with nut allergies.

At a 2021 charity auction, singer Usher paid $12000 for a Goldendoodle that he named Scarlett.